I made a documentary about Stevia. When the FDA watched it, they banned it. 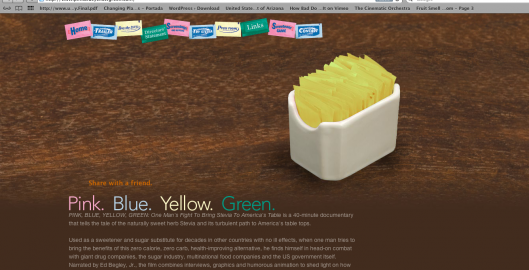 Stevia is an all-natural sweetener made from the Stevia plant found in Paraguay. The rest of the world uses Stevia as a natural sweetener simply because it has no adverse effects and does not raise insulin levels. I was hired to write and direct a documentary to explain the history of why Stevia is so pervasive in the rest of the world but not in the US. The movie was filmed in Paraguay, Japan, Canada and the US and it explained the story of the FDA keeping Stevia out of American’s diets since the early ’80s to make way for other chemical sweeteners. Aspertame or Equal, started out as an ulcer medicine for GD Searle until it was repurposed by some powerful stock holders (Donald Rumsfeld) to become a sweetener. FDA allowed it to be used and it is now responsible for more health related problems that all other products on the market combined. I had already entered and won several film festivals when I was told to pull the movie from the circuit. The FDA had contacted my backers and threatened them with legal action. To this day the movie has not been released but Stevia is growing in market share with health conscious consumers. If you want copies, please email me at david@ahcreative.com